The popularity of Arduino results in a community of programmers sharing Arduino related information. Programmers can easily find support and resources relating to Arduino. However, the issue is that lesser programmers are now using ATMEL studio to program their ATMEL microcontroller. The resources for ATMEL studio is accurately very limited at this point in time. This is unlike the competing Microchip series microcontroller where its documentation is a lot much better than ATMEL. Now that Microchip has acquired ATMEL microcontroller business, we can expect the documentation to improve over time.

The purpose of this web page is to assist those who are new to the ATMEL Studio platform, to guide them to upload their source code (or microcontroller machine hex code) into their ATMEL microcontroller.

Things That You Need To Prepare

In this example, we are using a very simple microcontroller chip ATtiny44A from ATMEL.

Please take note of the pins that are highlighted in green. These are the ISP programming pins on your microcontrollers. They will be connected to a programmer tool so that your firmware can be uploaded into the microcontroller chip.

The following are the ISP pins on a ATtiny44A microcontroller.

The connection of these ISP pins to the programmer tools will be presented in the next few sections.

There are a number of programmer tools which allows your to upload your firmware. In this example, we are using the AVR-ISP-MK2 programming tool from OLIMEX.

Please take note of the programmer tool pin out on their IDC connector header pins. This will be needed in the subsequent section for connection between the programmer and the microcontroller chip.

Can be used for both ATMEL Studio or Arduino IDE, but need to change firmware which is very troublesome and problematic. 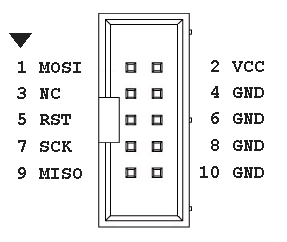 For illustration only. Not for use with ATMEL Studio. 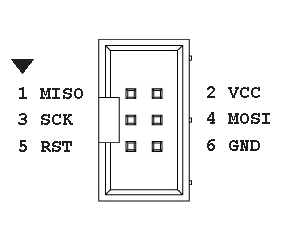 Most microcontroller chip nowadays are commonly in a surface mount package. The SMD package for ATtiny44A microcontroller is SOIC14. In order to program this SOIC14 chip, an adaptor may be needed. The following are some adaptor that you can purchase for your firmware programming.

If your circuit design has already incorporate the ISP programming pins into your PCB layout design, then you do not need to use programming adaptor socket. You just need to solder the microcontroller directly into your PCB board and download your firmware via the onboard dedicated ISP pins using an ISP programmer.

The following is a simple schematic to connect the ISP programming pins (IDC 10 pins header) to the ATtiny44A microcontroller.

Please note that you will need a pull-up resistor of about 10KΩ between the VCC and the RESET pins.

The following section will be using the ATMEL Studio software to help us check if our hardware connection is done correctly.

In this instruction guide, we assume that you already have a *.hex firmware available for uploading into the ATtiny44A microcontroller.

A *.hex file is generated after your project is compiled and built from your C Programming or Assembly language source code. 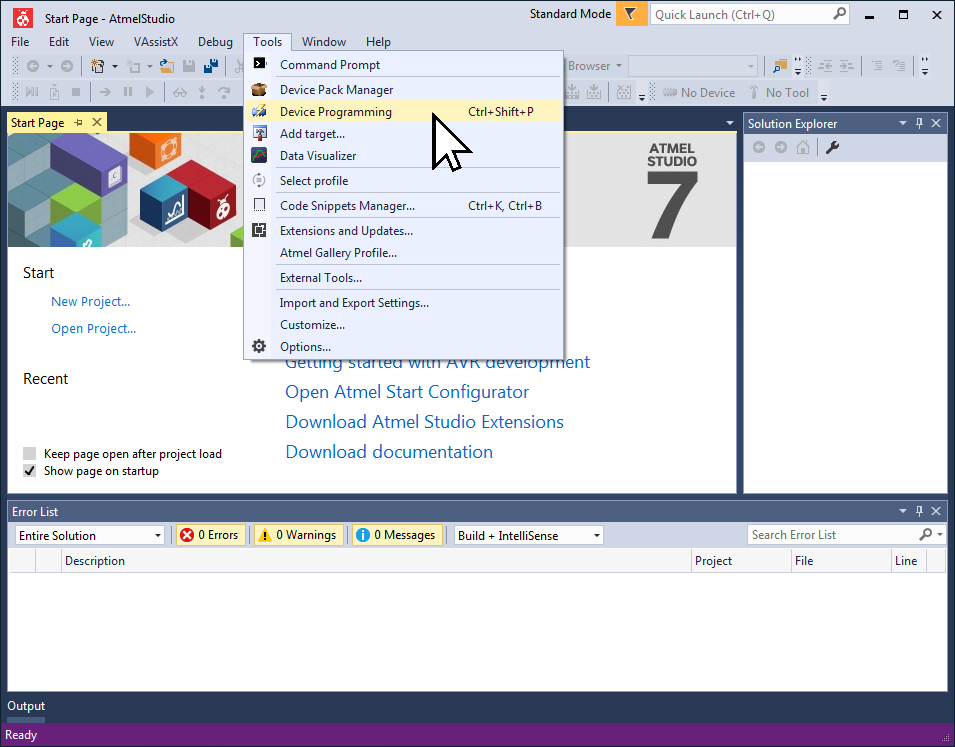 To upload a firmware to the microcontroller, open the Device Programming tools.

A dialog box will pops up like the one on the left.

Under the “Tool” section, select the programming tools that you got for your ATMEL microcontroller.

In this example, we are using the AVR-ISP-MK2 programmer tool from OLIMEX, so we have selected AVRISP mkII. 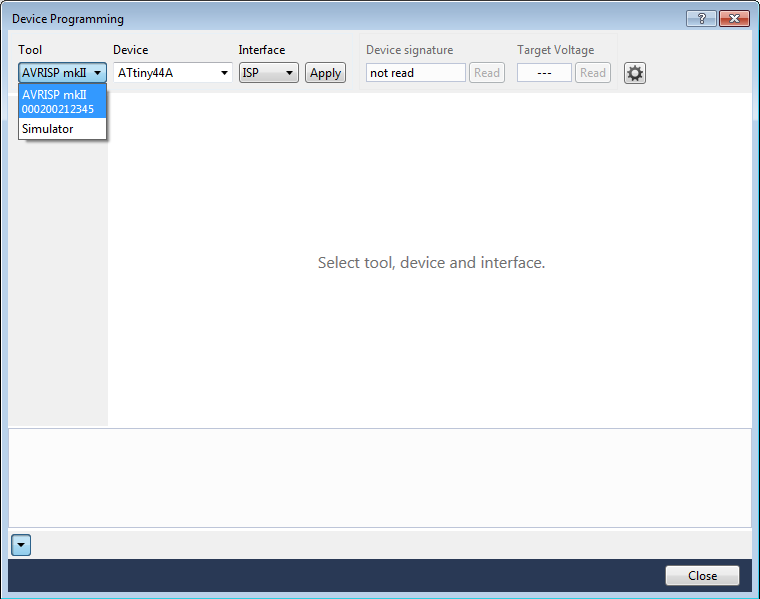 Please ensure that your USB programmer tool is plugged to your computer. If you did not connect it to your computer, it will not appear in this “Tool” section. If you plugged in the tool, the name of the tool should reflect immediately (real-time) on this drop down menu. The name will be removed immediately when you unplug out your tool.

If your programmer tool is not listed in this dialog box, it could be the device is not installed correctly, or a wrong driver is installed. In this case, you may have to go back to your ATMEL programmer tool supplier for further assistance.

Always refer back to your programmer tool’s provider for the setting up of the tool. Different programmer tool may have a different configuration that is needed to be set up before it can upload firmware into your microcontroller chip successfully. 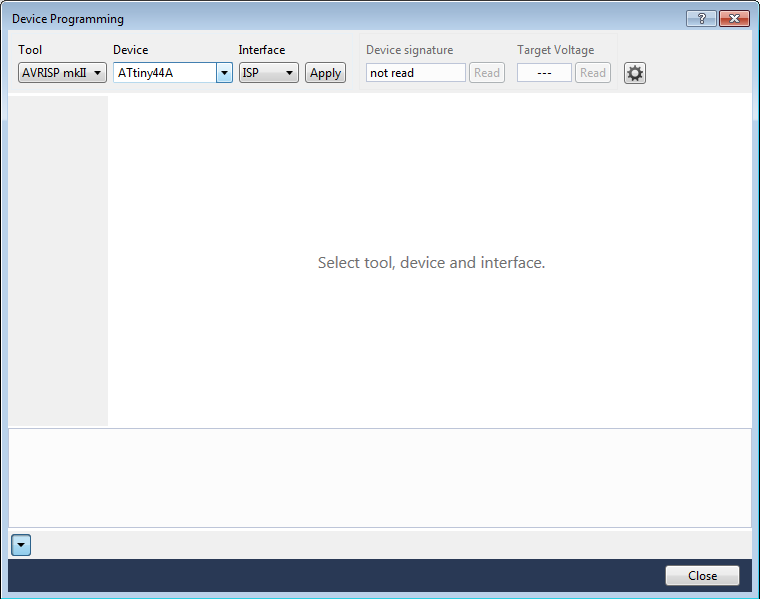 Next. Under the “Device” drop down box, select the device “ATtiny44A” which is the microcontroller which you will be uploading the firmware to.

Keep the options “ISP” under the “Interface” menu.

Once this is done, click on the button “Apply”.

If an error message appeared after clicking on the button “Apply”, it means that there is probably a problem with the connection. Check to confirm if the connection is wired correctly. Check if the wire is broken or if there is any wire shorted to another line. You will also need to ensure that there is a Vcc voltage of 5.0V or 3.3V on your microcontroller pin 1 and pin 14. If the microcontroller is not supplied with power, the same error message may appear as well. 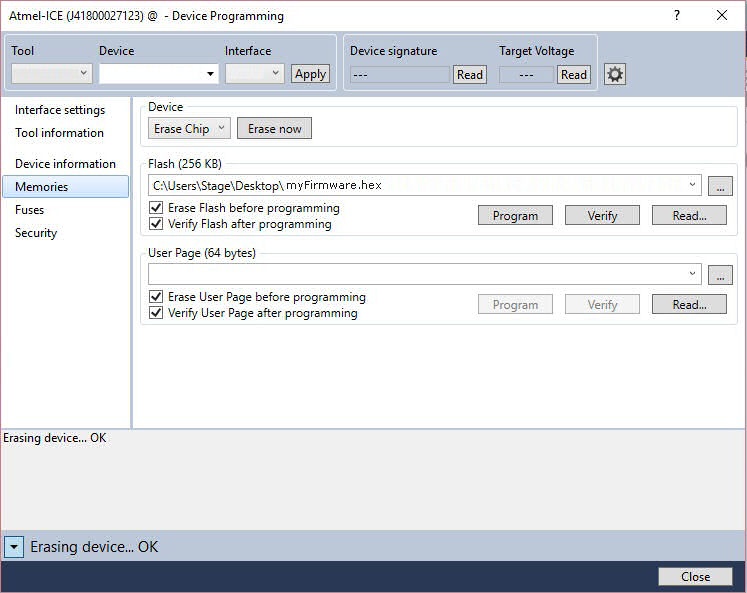 5) Upload Your Firmware to the Microcontroller

On the left-hand side of the list, select the option “Memories”. The right side of the Device Programming window will be similar to this screenshot.

Under the Flash section, click on the button “…” to select the firmware file (*.hex) from your computer system that you want to upload to your microcontroller. In this example, we are loading a filename “myFirmware.hex”.

You should check the box for the options as in this screenshot example. These settings are typical, though not very important if you forgot to select.

Click on the button “Program”. You should start to see a series of messages near the bottom of the dialog box’s screen.

The following is probably what you will see,

These messages indicate that your firmware is successfully uploaded into your microcontroller. You can disconnect the programmer or power off to remove the chip for further testing or use it for your production.

If an error message is encountered, repeat the checking procedure again as mentioned earlier to ensure that the programmer tool is connected correctly to your microcontroller.

Lock and Protect the firmware for ATMEL Microcontroller

You will still be able to overwrite the microcontroller with new codes. After loading in the new codes, you will need to re-enable the protection bits again to lock your codes. 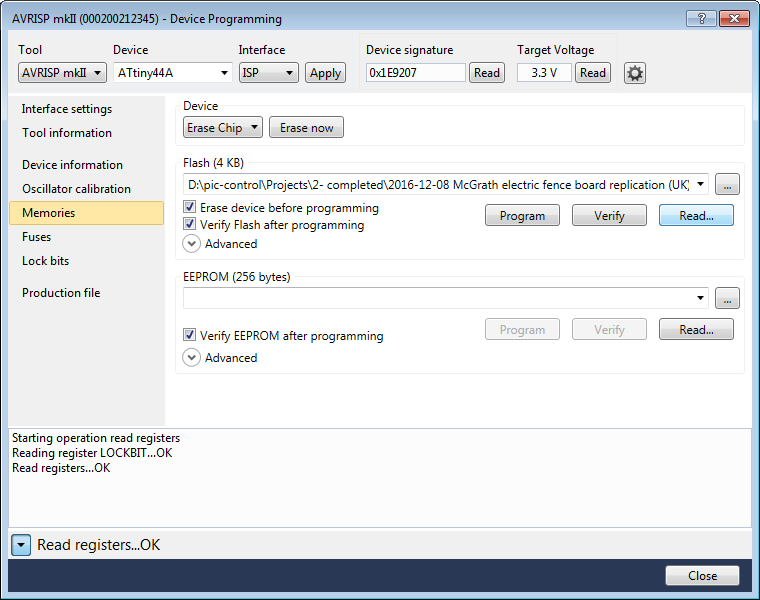 1) Reading from a Normal Microcontroller

To read from the microcontroller, click on the button “Read”.

A dialog box will appear asking you for a new file name for this read file. For this example we name the file as “Document.hex”, then click Ok.

The programmer will proceed to read the microcontroller and save the machine codes onto the file “Document.hex” 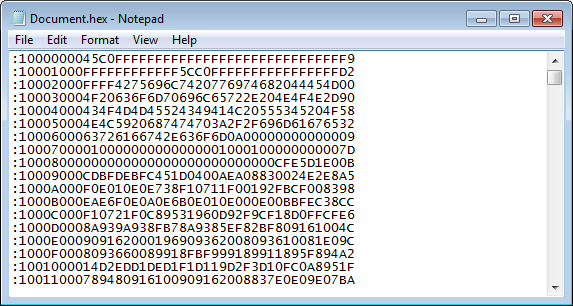 In this section, we will open the read file to have an idea how the machine codes for the microcontroller look like.

Open the saved file “Document.hex” using the Notepad.exe or other text viewer application on your computer system.

You should be able to see a long list of hex numbers similar to this example shown on the left.

You don’t have to know anything about the code. Just remember that they looks like a random chunck of numbers/letters inside the file. 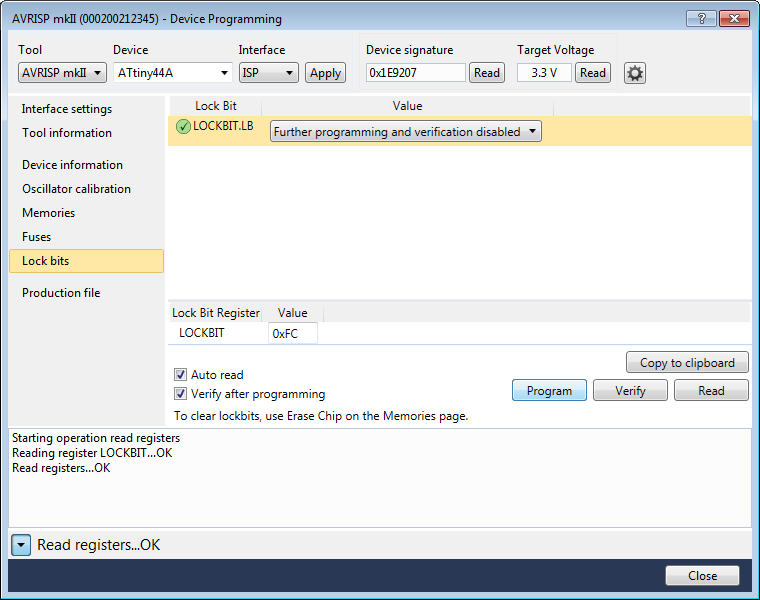 3) Set Code Protection to the Microcontroller

Next step, we are going to set a protection on the microcontroller to prevent others from reading the machine code. Proceed to the section on “Lock bits” as illustrated on the left.

Above the button “Copy to clipboard”, there is a field name “LOCKBIT”. On the right side is a text box where you can key in a value.

After changing the value to 0xFC, click on the button “Program” so that the programmer can apply this code lock setting onto the microcontroller.

There will be a series of messages which indicates that the setting is done successfully.

This is the same process that we did previously to read out the machine code.

Go to the section “Memories” and click on the button “Read” and save the read machine code in a file. 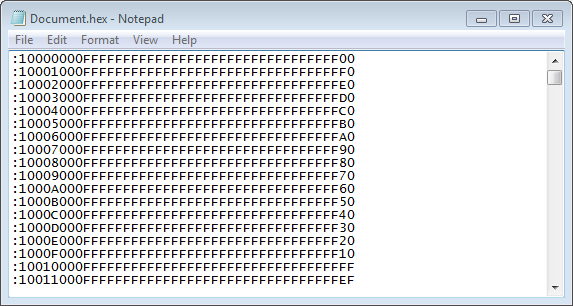 It should look different from the previous read attempt. As illustrated in the left side, you should notice a lot of “F” instead of the random chunk of numbers/letters.

That ends the instruction for protecting your firmware on an ATMEL microcontroller chip.

For C programming. You can open up your project files, and start editing your program, making the necessary changes. After this is done, you can press the button “F5” on your keyboard. The ATMEL Studio will compile the project, generate the *.hex file and upload the updated firmware to your microcontroller in a single step.

If you encountered errors during the compilation process, you will need to correct it and recompile again. There will be no firmware uploaded if your C programming source code contains error.